Below is a progression of a commission of a street scene in Seoul, South Korea that I recently completed.  My reference photo was a bit dark so it created a bit of a challenge.  Fortunately, the structure in the center is a famous landmark (called the Sungnyemun Gate) so I was able to find other photos to help me see its colorful and elaborate architecture.

I started with a thin wash of orange over the entire canvas as I knew there would be a lot of blue in this painting so I picked the complement to make the blue shine a bit brighter.

As you look down at the progression of photos, you'll notice that I started in the background and worked my way forward.

I stayed pretty true to the reference photo but to balance the composition, I asked if it would be ok to add a car or a bus entering from the right side.  We agreed on adding a car.

One of the biggest challenges was the tall office building behind the Sungnyemun Gate.  You can see that I initially included some detail on the windows but later softened and blurred the detail so that it wouldn't become an area to focus on.

I was given a pretty long lead time so I spent several weeks thinking about the painting before I even put my brush to the canvas.  I've heard that painting is 90% mental and 10% execution and in this case it was definitely true!  This was a challenge but I was pleased with the final painting and more importantly, so was my client! 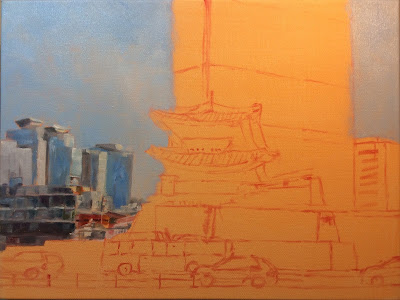 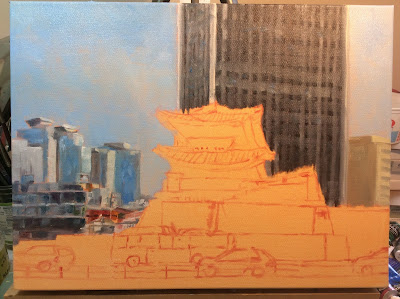 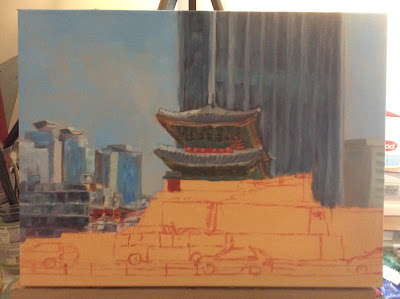 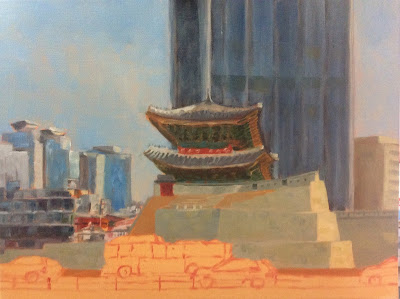 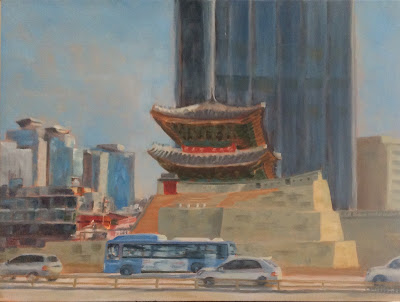