A funny thing happened at my painting demonstration . . . and, which do you like better?

On Tuesday, I gave a painting demonstration to the Leominster Art Association.  There were about 40 people in attendance and it was a great group with interesting questions.

Funny story:  I arrived early to set up my easel, palette, paints, etc. and then decided to sit in the audience to conserve my legs as I’d be standing for most of the evening.  People gradually started filling the seats and I could hear chatter all around me.   I overheard a conversation between two women that went something like this:  “Oh, wait, I thought this was going to be a watercolor demonstration. “ “Yeah, me too.  I’m so disappointed.”  “That definitely looks like oils.  I’m so bummed.”  Their comments didn’t bother me and I actually thought it was pretty hilarious.

I started my demo and initially talked for 10-15 minutes about my process, tools, creating a good composition, etc.  Then, I started painting.  Seriously, you could hear a pin drop in that place.  At one point, I turned around and said, “Gee, it’s so quiet in here I thought you all left!”  They laughed and we continued on.

After an hour or so, we took a break so folks could stretch their legs and get some refreshments.  I ran into one of those two women and she said to me, “Oh my gosh.  This is the best demonstration.  I’m thoroughly enjoying it and I’ve learned so much already.  I can’t wait to see more.”  Separately, the other woman approached me and said pretty much the same thing on how she was really enjoying the demo.

After the refreshment break, there was much more chatter and side conversations in the audience so I realized that the complete silence during the first hour was because I had captured their attention so well.  Either that or they were all sleeping but I’ll go with my first theory.

In preparation for the demo, I painted the top painting (see below.)  My canvas was already covered with paint from a previous painting that I wasn’t happy with so I painted over it.  For my demo painting (the one beneath it), I made a few modifications to the composition and started with a blank canvas that I toned with bright pink.

Happy Spring everyone!  Here in New England we got quite a surprise with an April Fool's Day snowstorm.  I'm thinking that was the last major snow of the season but we'll see what Mother Nature has in mind.

I only have a few plants in my house and I have to say that I don't give them much TLC.  A few recently found their way into the compost bin as they were hanging by a thread and my resuscitation efforts didn't pan out.  So, on a whim, I picked up this Cyclamen plant and we'll find out just how compatible we are.

I've always liked painting subjects with back-lighting so when I walked past my new plant sitting on the dining room table, I really wanted to capture the strong afternoon light that created a nice reflection on my dining room table.  I tried hard to stay loose and not worry too much about the details.  Easier said than done!

In other news, "Froot Loops" was interpreted by a floral designer at the "CCA in Bloom" show last weekend.  I had to laugh as the designer did quite a literal interpretation (see photo below) by including actual fruit in the design! 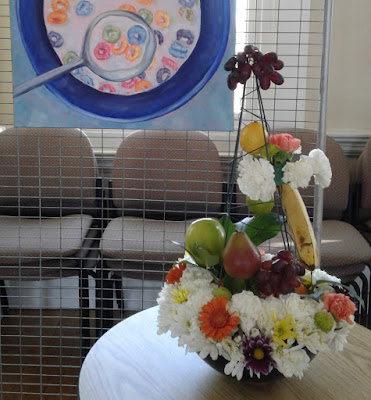 Posted by Laurie G. Miller at 5:10 PM No comments: